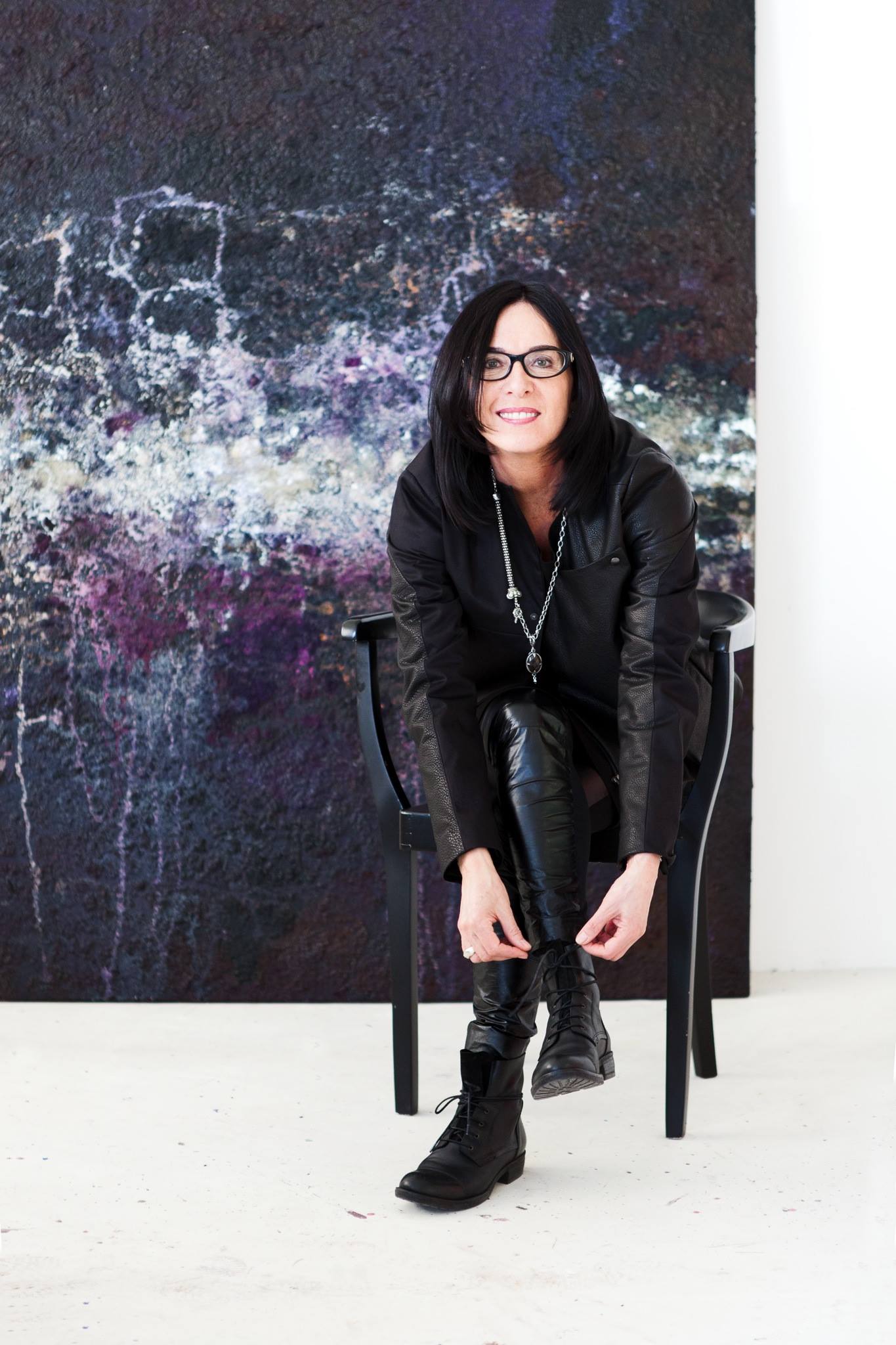 Alina Maria Schütte 2014 in her Studio

Alina Maria Schütte was born in Gdingen, Poland (1959) were she attended the Academy of Sculptural Arts (1974-1979). The artist has been living in Hannover since 1980 where she worked as a photographer and until 1986 turned to painting and sculpture exclusively. For almost a decade Alina painted in the 'Informal' style and participated in various group shows ands exhibitions across Germany before focusing on the material; paper and cellulose (wood pulp) treated with different techniques producing lively arrangements. In 2002 her training in the plastic arts led her to use paper, which she created reliefs and collages with, combined with print materials resulting in an overall dynamic approach. In the following years she manipulated the paper material into three dimensional object collages (Modulierte Farbigkeit, Galerie de Nesle, Paris, 1998 and UNESCO, Paris, 2000 and Kommunikation Sparda-Bank, Hannover, 2001). Through this sculptural handling of the paper the material aspect of the medium is emphasised and in turn, accentuates the whole working process. These object collages on canvas seem to explode out of the ground and are transported into space ( Grenzüberschreitungen, Kunstverein Gehrden e.V., 2002).

In the treatment of the material itself Alina Maria Schütte developed a personal technique: throwing the cellulose -the raw material for paper- on the canvas or ground, in the form of colourful masses. This strongly physical component turns the creative process into a form of action painting that seeks to treat the work from all sides. These coloured masses were initially made up of a pasty and heavy combination of cellulose, acrylic and pigments on large canvas (Städtische Galerie Lehrte, 2003)but progressively became more fluid, even flowing, as her work progressed into colour sequences on numerous panels. The plasticity of the cellulose mass in it's three dimensional form served to highlight the intensity of the colours. In a commissioned work for the cellulose company Zellstoff Stendal GmbH she created a direct correspondence between her works -fields of colour on cellulose panels- to the production of the material and the exhibition venue at the mill itself in Arenburg (Farbfelder, Projekt Stendal, 2007 und München, 2013/ Bonn, 2014). In relation to the architecture the artist realised the cycle Flow of Colours in the Departure Terminal A in the Hannover Airport in 2009, where the strong colours as well as the large format of her works (4- 10m) on Alu-Dibond panels, contrasted with the grey palette of the building. The whole installation comprised of an abstract form of painting that mainly aimed to bring forth the effect of the colour itself in a perceptual way. In the years 2010-2011 Alina continued her exploration of the possibilities of working with the material in a further series with lively colour modulation and contrasts on a smaller scale (1,5- 2m) on round and square (Alu-Dibond) panels (Château du Val, S. Germain-en-Laye, 2011.

Since 2012 the artist has moved and relocated to Berlin where she has realised various projects in relation to the city, its life and the bustling changes. For the topping out ceremony (Richtfest) of the Richtfest Berliner Schloss- Humboldtforum Alina created an architecturally themed Poster-Edition of he work in various versions - the proceeds go directly to the Foundation. Dialoguing with the colours and shapes of the various patterns and fabrics she interpreted the Spring/Summer Season 2015/16 through her own work in the series ("Art Libre, Galeries Lafayette, Berlin, 2015).

In her current work cycle she further develops the experimentation of her material and the examination of her own inspiration in the creative process and crosses the bridge between music and art, painting atmospheric narrative landscapes. She creates large format paintings, maintaining the technique of working with cellulose now combined with oil color, adjacent to the orchestral pieces from Richard Wagners Operas. The combination of the varying consistencies reveals the possibility of multiple layering and the role of chance within the work. ("Parsifal", Wagner Festspiele, Bayreuth, "Lohengrin", Commerzbank, Berlin-Dahlem, both 2016). Through these new works one can observe the ongoing development in the search for various new modes of painting as well as substantial shifts in the overall handling of the material and the resulting style. While retaining the use of the unique, and for the artist, typical technique of dealing with colour masses the components of the movement of colour become integral through out the fluidity of the material. The eye is stimulated by the subtly figurative themes and is led through the work by means of a flowing abstraction.